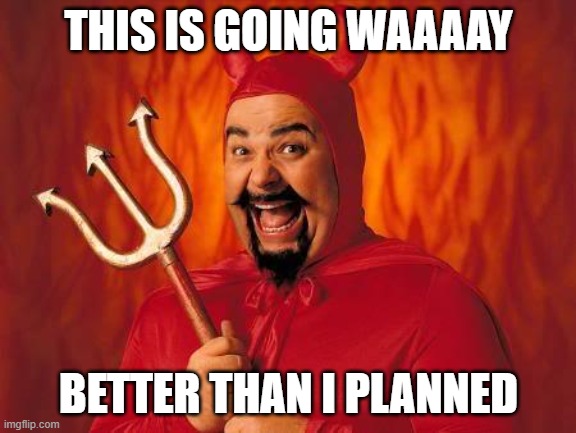 I have been blogging about the advantages and disadvantages of virtual reality and the likes for a while now. I have been warning about false doctrine, along with those who offer it and how it’s done for a while now. I have been praying in an effort to avoid false doctrine myself. The age of miscommunication of core biblical concepts has long since started. However, we just solidified new generations of biblically illiterate so-called Christians and I’m absolutely heartbroken over it.

Some time ago, I authored a blog criticizing the idea surrounding the perils of virtual reality. “If you can have anything you want, do you really need God?” was the title. I remain largely unimpressed with Mark Zuckerberg. I do give him full kudos for his intelligence and success when measured in monetary terms. I would like to believe he loves much. However, Zuck isn’t going to allow an unfiltered biblical message to flow from his platforms. Why? Because God’s story – past, present, and future, is one that cuts the legs out from under any weak and pathetic gentile claims offered by most churches that offer their altered version of the Gospel.

The core issue with today’s blog??? When I read, “Facebook Wants You to Connect With God. On Facebook.” this morning on yahoo!news.com I nearly broke down into tears. …And I mean that more than you may realize. I knew this day was coming, but I was hoping it wouldn’t be so soon. Go read the story above for context, and then continue with my entry for today.

Facebook has figured out, just like Hollywood, that people of faith are of the sort that when you hook them, they truly do keep coming back for more and more. They tend not to be as fickle as most customers. Thus, they’re easier to retain, which translates into much higher returns on your investments of time and money. Simply put, this is the kind of customer businesses like Facebook wants. Unfortunately, it is also the kind of parishioner some churches want. In the last few lines of the yahoo article, Hillsong Church’s Pastor, Sam Collier, blurted out the truth, but recovered:

He is partnering with Facebook, he said, “to directly impact and help churches navigate and reach the consumer better.”

“Consumer isn’t the right word,” he said, correcting himself. “Reach the parishioner better.”

You read the above correctly. Freudian slip? You better believe it. When you think, speak, and breathe in ‘consumer’ terms rather than disciples, it is bound to fall out of your mouth at some point.

You guys are good for the bottom line. You’ll show up often. You’ll look around. You’ll engage, or at least be a regular. All these are fantastic criteria for data harvesting, which is why Zuck wants to use you all for the purposes of creating deep and well-manicured batches of data he can sell to people who wish to solicit you. That’s the name of the game. To grasp the truth of Facebook in this realm, you’d need to wrap your arms around the fact that Zuck wants to lure you with your most prized possession – God’s Law. Then he’ll harvest copious amounts of data, including but not limited to the things you say, both flippant and right down to your most guarded secrets, your photos, the photos you look at, the clothes you wear, the places you travel, the goods you buy, the places you shop, the food you eat, the roads you drive, and all your potential future purchases, etc. to build the most comprehensive dossier on you possible, all to sell it for profit to folks that will market to you because they end up knowing you better than you know yourself. Essentially, you’ll be risking tossing your Theology out the window in exchange for buying more Earthly junk you don’t need, all without your direct consent. Not bad, huh? We used to call that a “con job” but don’t much anymore for some reason…

Do you really believe Zuck prays that each person using his multi-billion account platform is saved unto Him? I do not. If that is the case, it doesn’t appear to be present in ANY fashion.

Consider this… Look at what Facebook is and isn’t. Is Facebook the place where you may speak freely? And I mean TRULY and BIBLICALLY freely? Can you ask and have answered truly problematical hurdles in your life? What if you struggle with homosexuality? Can you expect to air the most personal portions of your life, receive a biblical response, and enjoy that support? You cannot. To offer you the biblical response to questions that loom as large as a question of homosexuality violates the terms of Facebook’s user agreement. You won’t hear that sermon on Facebook. If you do, you’ll never hear it a second time. That I can assure you. It’ll be reported as hate speech, and either warnings to curtail those views will ensue or those offering it will be booted without a trace.

This is how it’ll start… You’ll have a buddy roll up and tell you about this really great online service he’s been listening to. He streams it through his big-screen TV and sound system downstairs in his ‘mancave’ each Sunday. What’s better is that when he misses it, he can go back and watch it any time. So now he doesn’t even have to dedicate time for the Lord, he can just squeeze Him in at his leisure. You’ll hear about Facebook groups dedicated to traditional small and large group functions. You’ll hear about connections made with locals and people from other countries. You’ll get a sense of community from people you find that are just like you.

So where is the problem, Michael? Sounds pretty good, right? Problem #1 – you’re not supposed to default to being like all the other fallen sinners as if this was some sort of sub-divine club. You’re supposed to aspire to be something more. Surrounding yourself with those like you as a personal ‘relate’ is fine, but appealing to the lowest common denominator isn’t what God expects from us. He warns us about this in about 7000 places in the Bible.

Problem #2 – whatever biblical stories you get will be watered by suppression. The more biblical the story, by virtue, the more it’ll fly in the face of the precious Facebook user agreement. Thus, content with true biblical instruction and exposition will be systematically suppressed. The stuff that touches a nerve with the feminists or gender crowd will get kicked off, pronto. Guaranteed.

Problem #3 – Wisdom begins with a healthy fear of the Lord. Any content that truly offers this will be suppressed, while the Joel Osteen junk rises to the surface. This is for two reasons. One, offering consequences for one’s behavior isn’t the Facebook way. The idea that you’re bound to the outcome of the choices you made is the antithesis of Facebook. They love to “tell your own truth” and support it rather than His truth. Two, the Joel Osteen Junk will be monetized. The folks like Joel will pay through the nose to spread their content. Thus, the offering folks make to those organizations will ultimately be handed back over to Facebook for the purposes of using the platform as a force multiplier to be in front of more and more people. The only way to capitalize monetarily, as Joel the snake oil salesman, is to maximize your audience. If and when you offer a convicting message that makes people think and question their lives, naturally you’ll lose some folks. But when you offer supposed love, teddy bears, and hugs from the Big Guy, with the promise that when you pray hard enough you’ll get that new BMW you’ve been wanting, you’ll pick up some folks. I can assure you which path Joel will continue to choose. He’s got a track record for one path and one path only. I’ve blogged about Joel HERE and HERE…

We’re going to experience a trend away from personal face-to-face contact with churches. We’re going to see the Gospel watered down. We’re going to run into more and more ‘believers’ that couldn’t find their rump, even if you gave them a map and put one hand in their rear pocket for them.

This isn’t going to go well, my brothers and sisters. We’re going to have false doctrine running out of our ears. …And ultimately that means people who believe they’re saved will burn in the recesses of hell for eternity. Few things keep me up at night compared to this.

Acts 2:38-42: Peter said to them, “Repent, and each of you be baptized in the name of Jesus Christ for the forgiveness of your sins; and you will receive the gift of the Holy Spirit. For the promise is for you and your children and for all who are far away, as many as the Lord our God will call to Himself.”  And with many other words he solemnly testified and kept on urging them, saying, “Be saved from this perverse generation!” So then, those who had received his word were baptized; and that day there were added about three thousand souls. They were continually devoting themselves to the apostles’ teaching and to fellowship, to the breaking of bread and to prayer.

I pray you be salt and light. I pray you resist the temptation to lessen your biblical literacy and experiences.