My response?  YOU BETTER…

I can’t tell you how many times I hear that in conversation these days.  It appears that progressives have managed to yet again propagandize and alter a perfectly good word and turn it on it’s ear.  On a side note, they’re really good at this.  Most of the time the association they try and draw isn’t even truth or fact based.  But that doesn’t stop them – the ends justify the means.  If you really want to learn the strategy they employ, pick up a copy of Saul Alinsky’s “Rules for Radicals” and read it.  Do so with a puke pan near you as well.  If you don’t become nauseous, you aren’t human.  That’s the progressive’s playbook, so be warned, you won’t like it.  Sun Tzu – “know your enemy” I always say… 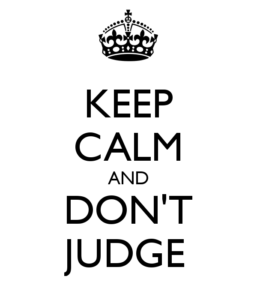 So here I am, enjoying a conversation within my social group and somebody’s bad behavior becomes a topic.  Just for example, let’s say Johnny is cheating on Janey.  Both are absent from the social group that evening and it gets brought up.  It doesn’t matter whether that volley of hearsay lasts one sentence or a dialogue spanning two hours.  You can bet your tuckus somebody will undoubtedly toss out the “Well, I don’t judge” card.  I promise it.

I’ve been giving that a lot of thought and while I’m compelled to right all the world’s wrongs, I have to keep that urge in check.  But, one thing I’m diligently working on is my “BS Detector” as a friend of mine calls it.  We’re so accepting now on so many levels we never question anything that is said.  For example, what would you say when somebody walks up to you and says “At what point did you stop beating your wife?”  Is there any response you can give to that?  This assumes of course that you’re not actually a wife beater, but the point is, people make a statement with their question or in some cases just a statement itself.  If we answer that question or respond to that statement in kind, by very definition we further the problem.  If the statement is false in precept or premise, then any answer or dialogue that follow it are in turn flawed by nature.  So when somebody tosses out “I don’t judge,” how are we to understand what they’ve just said?

Unfortunately Christians see the above as what is being applied when someone states “I don’t judge.”  I think we’re getting it wrong.

Yes, in this context given in Luke, Jesus is saying don’t judge.  He’s telling us not to act as God.  Essentially, Jesus is warning us not to judge in terms of condemnation.  But, and this is a big BUT, he IS NOT telling us not to consider or discern between things.  It is incumbent on every Christian to differentiate and ‘judge’ what we see and what we do.  Not in the sense of who walks through those pearly gates or takes the quick flush to Hades, but in the sense we need to perform good judgments of associations, character, situations, actions, etc.

The funny thing about Luke though is the discernment Jesus teaches us about as well.

Luke 6:43-45 – For there is no good tree which produces bad fruit, nor, on the other hand, a bad tree which produces good fruit. For each tree is known by its own fruit. For men do not gather figs from thorns, nor do they pick grapes from a briar bush. The good man out of the good treasure of his heart brings forth what is good; and the evil man out of the evil treasure brings forth what is evil; for his mouth speaks from that which fills his heart.

If your next door neighbor is a murderer, rapist, pedophile, with a propensity for gutting the neighbor cats, are you going to send your 5 year old daughter over there for basement play dates with him that last all day, or are you going to use better ‘judgment’ than that?  That’s what I thought.

We’re supposed to judge.  It is entrenched in our mandate.  If we don’t judge, how can we tell right from wrong?  How can we apply the Good Book if we have no sense of judgment?

The progressives and secularists would have you believe, as apparent by their mantra “I don’t judge” that in fact, ‘judgment’ is somehow bad and if you do so, you’re falsely convicting a person when it isn’t your place as God, or otherwise.  (Kind of funny coming from a group of people that generally renounce God by the way…  LOL.)  Instead, we’re supposed to judge routinely and often.  We also can’t loose sight however, that the bible commands us to love.   …Even those with whom we disagree.  We have a responsibility to judge, and love, and not to hate.

As I watched Ravi Zacharias say the other day, “In a pluralistic society, let us as Christians be light, salt, and learn to love one another, and let God be the judge over all of us.  He is the One who is pure in His judgments, as we can make errors.”  I think this is fitting and keeps it in context.

Can we judge Johnny and Janey then?  Sure.  We can understand and agree the cheating is wrong, because we judged.  After that discernment, we pray for them, include them in our fellowship, and trust God to their path.  This is simple.  This is appropriate.  This is necessary.

Judge, in the manner to discern and compare.  Don’t judge to condemn.  Almost as important, hold this conversation and education with the social groups tossing around their flawed view of the word and the associated action.

Thomas Paine –  “A long habit of not thinking a thing wrong, gives it a superficial appearance of being right…”