I didn’t.  Rest assured I do now.  It’s a great story too, so buckle in for a quick ride.

Some of you are movie buffs.  Me too.  I love film.  I especially respond to dramas, and I will make special time to see a really cerebral drama in the theater if the claim looks valid.  When I saw that “Dunkirk” was being brought to audiences by Christopher Nolan, I couldn’t wait.  I have really enjoyed his work over the years and I believed he’d ‘bring it’ if you know what I mean.

In case you’re unfamiliar with the movie or the war history surrounding it, the British Expeditionary Force and a fair portion of the French soldiers had been driven back to a tiny bay area in France just across from England.  The good guys were completely surrounded on land, experienced constant strafing runs by German planes, were taking heavy shelling from German artillery, and the bay at Dunkirk was notorious for gobbling up ships since it was so rough and shallow.  The German panzer tanks were only waiting for fuel and some resupplies not far away, and the end was looming.  Things looked bleak. 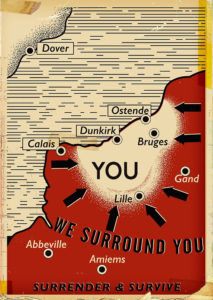 The image above is an actual pamphlet the German airplanes were dropping over the beach for days leading up to their impromptu exit.  Imagine the psychological toll you’d be under when reading things such as this as they fell from the sky, all the while knowing the Germans preferred you dead or worked to death as opposed to capturing you.  I can’t imagine facing those kinds of life altering circumstances without the Lord.

With nearly no ammunition left, no tanks, no artillery, and little to no air support, roughly 400,000 men were going to be annihilated and/or captured by the Germans.  Encrypted methods of communications were gone, and a cable operator only armed with morse code was left to get word across the English Channel without tipping the Germans off.  How does one give an accurate portrayal of the circumstances, relay a plan, and communicate to headquarters, when the bad guys are listening on a party line?

From the British Commander to the cable operator came only one fragmented sentence and it set the stage for the greatest rescue in WWII history:  “But if not…”

Rewind several hundred years.  Shadrach, Meshach, and Abed-nego refused to worship the golden image King Nebuchadnezzar placed before them.  Ol’ King Neb threatened them with being thrown into the hottest of fires, 7 times larger and hotter than ever before, to be burned alive and yet they refused.  The response, you ask?   Daniel 3:17-18 – “If it be so, our God whom we serve is able to deliver us from the burning fiery furnace, and he will deliver us out of thine hand, O king.  But if not, be it known unto thee, O king, that we will not serve thy gods, nor worship the golden image which thou hast set up.”

The English troops were well studied in the Word.  It was a crucial part of their daily struggle for strength and courage.  The folks on the receiving end of the communication knew instantly the scenario and were not only apprised of the situation, but invigorated to save them all.  “But if not…” translated into “WWII speak” reads something like this in my mind:  “We are without contingency.  There are no other options but you.  We need rescue and we require it immediately.  If you don’t, we shall perish.  And if we do, we’ll do so immediately and with honor.”

How beautiful and truly awesome is it that a bit of obscure scripture could tell the entire story so aptly that not only was the full compliment and intent conveyed, but that it inspired hundreds of small civilian craft dropping what they were doing to surge across the channel into a war zone and pick up every last man possible?  If you can for one second imagine something that huge and significant from three small words of scripture, you’re starting to get the idea behind the Word of God.  There’s a reason this is called the Greatest Book of all Time.

This is an elegant story my friends.  Absolutely timeless.  And as luck would have it, one of thousands available to you, should you pick up a Bible and read it.  I’ve had as much fun learning of the proper application of scripture in history since it was recorded as I have learning scripture for myself from the written Word.  There’s a lot left for me to learn, so I’m not worried about running out anytime soon.  I’m enjoying scripture and all it has to offer daily.  Join me friends.  Be salt, and seek light.

7 thoughts on ““But if not…” Do you know the significance of this phrase?”