Sure they do.  But what about #alllivesmatter?  I saw this facebook meme running around the other day and it was one of the few I gave more than a half second to for consideration. 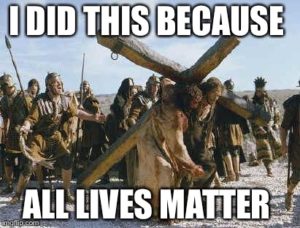 Is there anybody who doesn’t fully comprehend what is arguably the most famous passage in the Bible?

John 3:16 – For God so loved the world, that He gave His only begotten Son, that whoever believes in Him shall not perish, but have eternal life.

I guess I didn’t note the asterisk where is said blue lives or black lives were in some sort of sub category.  Did you?

You’re going to need to hold on, because this blog post is going to take you for a ride.

Since the recent events surrounding citizen and police shootings, I’ve held a series of conversations with some intellectual friends.  This isn’t a chicken or egg conversation.  There are some pretty serious considerations at hand and we might be missing the point.  I’m going to make a statement below and you dissect it.

My statement:  “We seem to be busy squabbling about the issue of what happens when a white cop pulls over a black man for a his blinker light being inoperative.”

Notice how you felt kind of weird because of the black/white thing?  On one hand I clarified this as a ‘white’ cop.  On the other a ‘black’ man.  On another level one is universal because I wrote ‘cop’ and that seems to apply, but it really means all cops, not just men, women, white, latino, black, etc.  Notice how we soak up that spill like a sponge?  Those inferences are more than significant.  We skip over them, but the post-modernistic propaganda that demonizes Christians is at work here.  We’re patterned through what we see to view and recall things a certain way.  This is amplified and spread through our contact whether that be the race baiters first, or the news second, or the passing of nonfactual and untrue posts via social media.  So we’re having somebody else’s view of reality formed in our minds, rather than seeing things for what they are.  …And I have news for you.  Perception matters.

You may think the above was the point, but unlike Sean Connery in “The Untouchables” where he says, “Here endeth the lesson,” we’re not done…

(Language Warning for those of you who watch the whole clip rather than starting at 2:50)

While the meaning and intent of the words we use matter on a grand scale, there is a natural order to things.  Instead of debating over the band-aid I’m going to put on my son’s scraped knee, wouldn’t a discussion about why he scraped his knee and methods to avoid it from happening again be prudent?  If so maybe the cop and the motorist having an escalation are avoidable.  If I could persuade you to consider it, would it be of value?

1 Corinthians 14:40 – But all things must be done properly and in an orderly manner.

I recently was alerted to a message from Professor Stephen L. Carter of Yale that basically had me rethinking things as simple as traffic stops.  In a recent article in “The Atlantic” he unabashedly states enforcing the law is inherently violent.  Here’s the nitty gritty:

“Law professors and lawyers instinctively shy away from considering the problem of law’s violence.  Every law is violent.  We try not to think about this, but we should.  On the first day of law school, I tell my Contracts students never to argue for invoking the power of law except in a cause for which they are willing to kill. They are suitably astonished, and often annoyed. But I point out that even a breach of contract requires a judicial remedy; and if the breacher will not pay damages, the sheriff will sequester his house and goods; and if he resists the forced sale of his property, the sheriff might have to shoot him.

This is by no means an argument against having laws.

It is an argument for a degree of humility as we choose which of the many things we may not like to make illegal. Behind every exercise of law stands the sheriff – or the SWAT team – or if necessary the National Guard. Is this an exaggeration? Ask the family of Eric Garner, who died as a result of a decision to crack down on the sale of untaxed cigarettes. That’s the crime for which he was being arrested. Yes, yes, the police were the proximate cause of his death, but the crackdown was a political decree.

The statute or regulation we like best carries the same risk that some violator will die at the hands of a law enforcement officer who will go too far. And whether that officer acts out of overzealousness, recklessness, or simply the need to make a fast choice to do the job right, the violence inherent in law will be on display. This seems to me the fundamental problem that none of us who do law for a living want to face.

But all of us should.”

Did you catch that?  Every law is violent possibly or even potentially, if the person on the front side of the badge won’t submit to compliance.  Maybe we need fewer laws?  Maybe we need to move past situations that tend to escalate quickly?  Are these the answers?  I’m not sure it is that simple, but I am quite certain an overly governed society coupled with a disdain for God is the road leading towards Hades and not away from it.

What if we could back up and not have the petty traffic stop to begin with?  What kind of things would need to be present in western culture to attain this?  We’d need a cop shop not run by those interested in generating revenue from citations, yes?  We’d need a political class amenable to backing off laws, and reviewing those on the books for validity annually, correct?  We’d need to be comprised of decent people that got their tail lights fixed when they were broke so an officer didn’t have cause or need to pull us over in the first place, agreed?

Job 34:21-30 – “For His eyes are upon the ways of a man, And He sees all his steps.  22 “There is no darkness or deep shadow where the workers of iniquity may hide themselves.  23 “For He does not need to consider a man further, that he should go before God in judgment.  24 “He breaks in pieces mighty men without inquiry, and sets others in their place.  25 “Therefore He knows their works, and He overthrows them in the night, and they are crushed.  26 “He strikes them like the wicked in a public place, because they turned aside from following Him, and had no regard for any of His ways;  28 So that they caused the cry of the poor to come to Him, and that He might hear the cry of the afflicted—29 When He keeps quiet, who then can condemn?  And when He hides His face, who then can behold Him, that is, in regard to both nation and man?— 30 So that godless men would not rule nor be snares of the people.

What other things would need to be present in order for this to work well?  How about a little God here and there.  Would the Lord be helpful to us all?  Frankly, our progressive culture combined with the literal post-modern societal has told us they’re all about the community.  But the reality is we’re seeing the community, the family, and the Faith continually deemphasized.  There is a way forward however.  Sure, we need the will and guidance of man upon fellow man in the law itself and how it is applied, but we absolutely require the Word of God.  Are we not to be salt and light?

Matthew 5:13-16 – You are the salt of the earth, but if salt has lost its taste, how shall its saltiness be restored? It is no longer good for anything except to be thrown out and trampled under people’s feet. “You are the light of the world. A city set on a hill cannot be hidden. Nor do people light a lamp and put it under a basket, but on a stand, and it gives light to all in the house. In the same way, let your light shine before others, so that they may see your good works and give glory to your Father who is in heaven.