And more importantly what to do when you stumble across it?  Well, the fact is, and I don’t mean to start this blog entry by punching you in the face, but if you are wondering to yourself right now when the last time it was you were in proximity to postmodernism, then you’re already at a disadvantage.  Why?  Because you’re bathing in it and don’t even know it.

Simply put, “postmodernism” has become the catalyst of the social science movement to systematically destroy what you thought you knew about history, art, culture, philosophy and theology.  When I mentioned ‘social science movement’ if you were thinking to yourself, “man, that sounded like something I’d have heard about in college,” you’d be right.  I believe a relatively fair blanket statement can be made that most of the origins of this malarkey sprung from a handful of folks masquerading as college professors.

As an immediate threat, I see postmodernism as the wolf loose in the culture hen house.  For some of you, that may not seem like much.  Me?  I’m able to differentiate between religion and culture.  Why?  Because I know one forms the other.  In case I’m moving too quickly, religion shapes culture.  Not the other way around, as many would have you believe.  Ask yourself a very simple question in order to know what I’m suggesting to be true – When you have a nervous breakdown and your life falls apart, do you get better or worse at your job?  😉  Now ask yourself when you become saved and born again, do you get better or worse at your job?  …And there you have it.  When you’re saved your Faith settles and helps you.  You receive aid and enjoy order by virtue of understanding properly the Bible.  Your Faith gives you strength, regardless of your location, thus culture.  Religion is therefor placed atop culture.

Now…  For those of you on the multicultural fence, I can tackle that another day in a future blog.  But for the purposes of this blog, let’s run with the idea, which I can prove by the way, that multiculturalism does not, cannot, and should not work.  That leads us back to how postmodernism is being applied to us daily.  That’s right, you’ll have to come back to learn my thoughts on multiculturalism.  That’s rather slippery of me, but you’ll forgive me I’m sure.  😉

Today postmodernists have silly notion that, and in primary that of philosophy, that there are no truths and nearly no moral facts.  (As an aside, since we can prove their morals are based on a sliding scale, and their ‘truths’ change, does a statement like that apply to their core beliefs as well?)  These wolves would have you belief everything is relative.  I’m beginning to hate that word, as it is used improperly so often, I’d much prefer to see it gone.  In essence, postmodern philosophy tells us nearly all things are in a state of flux – constant change.  Each reality depends on your perspective and for the purposes of religion what that means is man is elevated while God is watered down.  Do you believe that?  Is that what you find in scripture?

Did you remember reading in Exodus, “I am the Lord your God who has brought you from Egypt, and it sure would be great if I could have your attention.  I’ve got a couple basic housekeeping items to go over including a volunteer chart for weekly pool maintenance and, well you know what, to heck with this, PARTAAAAAAAAAAAAAY,” or was it a bit more pointed than that? 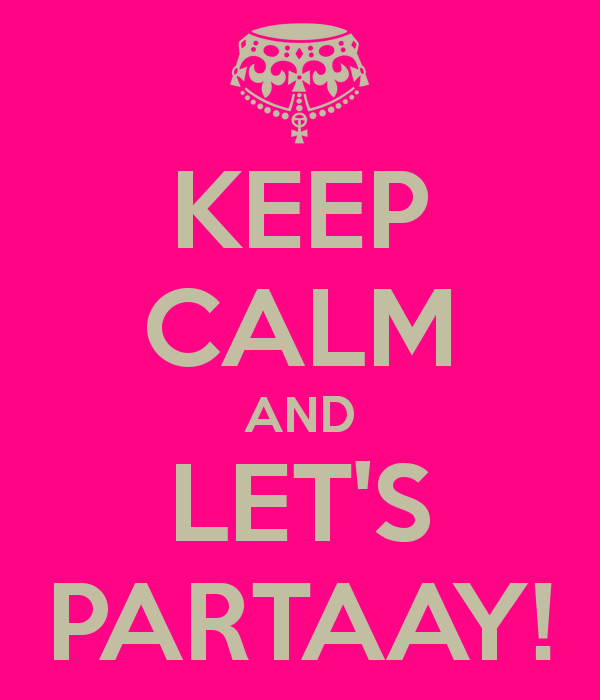 I remember it this way, Exodus 20:2-3 – I am the Lord your God, who brought you out of the land of Egypt, out of the house of slavery.  You shall have no other Gods before me.

No sir, far fewer things are relative than postmodernism would have you believe.  I stumbled across an essay George Orwell wrote in the London Tribune entitled “In Front of Your Nose” and contained therein was this little nugget I gleaned for you:  “We are all capable of believing things which we know to be untrue, and then, when we are finally proved wrong, impudently twisting the facts so as to show that we were right. Intellectually, it is possible to carry on this process for an indefinite time: the only check on it is that sooner or later a false belief bumps up against solid reality, usually on a battlefield.”

Think through that one for a second.  In March of 1946 Orwell provided that essay for publishing.  The world was still cleaning up from World War II and especially a place like London would have a strong Christian base and undoubtedly know right from wrong, hold a strong moral compass, and reject relativity on it’s face.  Yet, here he is warning us that if we quickly engage self refuting ideology we’re right back in the pagan soup again.  He reminds us that war is usually what it takes to wake us up to the fact we knew all along we were embracing were lies, or a series thereof.

Postmodernists have taken the battle raging at the average college campus out into the streets for us all to digest.  We’re witnessing a shift from the discernment of people as to the content of their character, to instead judging people by their color, gender, sex, and ethnicity.  For a great deal of time this same gaggle of unhappy people pushed Marxism on us and waged the war by means of class conflict.  It was popular with them to make false claims of the ‘haves’ and ‘have nots’ to push their agenda.  They’ve changed the playing field tremendously by initially offering up alternatives to history, biology, and political science, and now asserting their dominance through violence, squashed debate, activism, marches, and constant instigation of the easily corrupted.  They’ve figured out ways to use students and now the public to react immediately and violently to any opposing idea for any or no reason.  You’ve seen hundreds of examples of this ranging from people being hurt or threatened on a college campus, to people standing in the middle of interstate when the President comes through town, to attacks on individuals or groups through the media, and even public calls for their lives to end.

What position does that leave you and I in today?  Think about that.  “Tolerance” is the buzz word these folks use today ad nauseam.  Do you consider yourself tolerant?  I do.  But tolerance is a good thing only when applied in the right place and time.  There are times you shouldn’t be tolerant.  Would you be tolerant of somebody raping your daughter?  Would you tolerate being stolen from?  Of course not.  And before you ask yourself just how tolerant our opposition is, you should know the answer already.  Walk up to a postmodern liberal, make the statement, “I think abortion is obscene,” and see how much tolerance you get.  Yeah, real tolerant huh?  They’ll instantly organize an angry mob to come after you.  …And the word “mob” is an accurate portrayal of both the group and mentality behind the tolerance movement.

Dorothy Sayers had this to say about liberal tolerance: 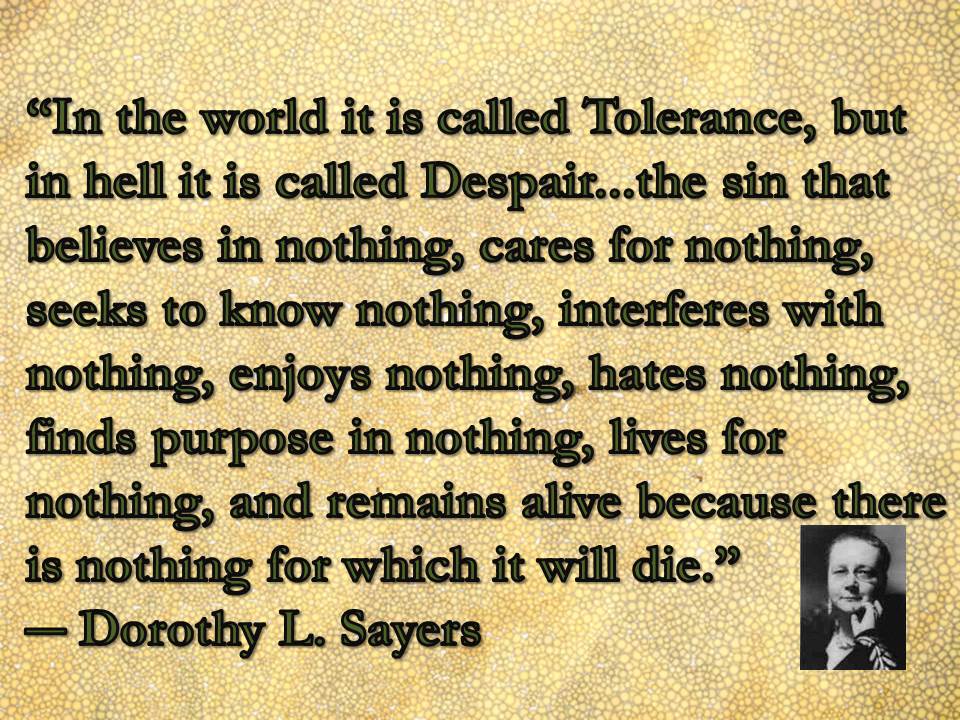 Daily we’re being taught via postmodern responses and tempering that God, science, and empirical facts are no longer valid.  Rather, all three are roots of oppression and are to blame for any wrong, perceived or factual.  If you’re a Christian, you bear the burden for all wrongs done to just about anyone anywhere in history according to these people.  If you really want to become the scourge of society, add the circumstance of being white or a man into the mix and watch the victims come out of the woodwork to claim their pound of flesh.  After all, that’s what this is about as near as I can tell.  This isn’t about righting wrongs.  If it were, justice would be served and we would move on.  Nope.  Instead, this is about two things – power over others, and me gettin’ mine.  No more, no less.  When you see people lining up to claim ‘victim status’ for things not directly done to them, you’re watching postmodernism play out live in streaming color.

By now you should be thinking, “This is good stuff.  I like that I’m learning.  But how do I combat this?”  The answer is so simple it took me a while to arrive at it myself.  I’m a bit taken back by the fact it hadn’t donned on me earlier, but when confronted with nonsense, and that’s really what postmodernism is, the only true way to push through is with thorough biblical literacy.  Period.  There is no other way I can think of.  I read a quote by Rev. Bryn MacPhail in which he said, “…let us resolve to stand firm against the negative currents of postmodernity, but let us do so humbly.”  I’m not sure I’m able to put the thought forward any better than this.

The sole reason postmodernism has taken a foothold is the lack of moral consensus our culture has devolved to.  Dr. John Patrick calls this “schism of the soul” in which we no longer distinguish as a culture what is wrong and what is right.  Arnold Toynbee refers to the same thing as a “lack of moral consensus” so to speak, and he’s spot on.  Where does this come from, the ideology of wrong and right?  Straight from the Bible, folks.  When we aren’t well versed in our scripture, we’re simply putting ourselves at a significant disadvantage.  Our answers, irrefutable truth, and the guidance we need to live and live well, are contained in the Good Book.  That’s how we win, people.

Hebrews 4:12 – For the word of God is living and active and sharper than any two-edged sword, and piercing as far as the division of soul and spirit, of both joints and marrow, and able to judge the thoughts and intentions of the heart.

Be salt and light my friends.  We know God is listening, but you never know who else is…  You may be surprised.  😉