“Oh man…  It was only a matter of time after he said he was studying Latin.  I suppose I can look forward to all kinds of that jazz for the next six months in his blog posts…  Ugh.”

If that’s what you’re thinking, well…  You might onto something.  🙂

Seriously though, as I mine for more understanding on popular and common Latin phrases, the origins and what made some more prominent are really interesting in and of themselves.  My lawyer recently used the “Ultra vires” ditty on me.  I was bawling about a subordinate who made promises well above his pay grade, and I was left contending with fallout.  He uttered, “ultra vires” and kept writing.  Of course I asked what my attorney meant.  I knew it was Latin, but I didn’t know the meaning.

Roughly translated, “ultra vires” [uhl-truh vahy-reez] means “beyond the powers” so to speak.  To give you an idea how an attorney views this, if an act requires some sort of legal authority and you act within that authority, a lawyer would consider that “intra vires” or within the powers of the authority granted you.  Should you act outside that same authority, you’re now “ultra vires” as it pertains to the matter.  Essentially your actions are valid when intra vires, and invalid when ultra vires if that makes the correlation easier.  Granted, I was glad for the lesson and proper understanding, but that didn’t immediately rectify the mess my staff member had created.  While the possibility exists that a long winded rant would help me master the colossal red rump I’m having over it, sharing the details would be a really lousy idea and I need to concentrate on letting that stuff go.  Looks like Daddy needs a prayer session.  😉 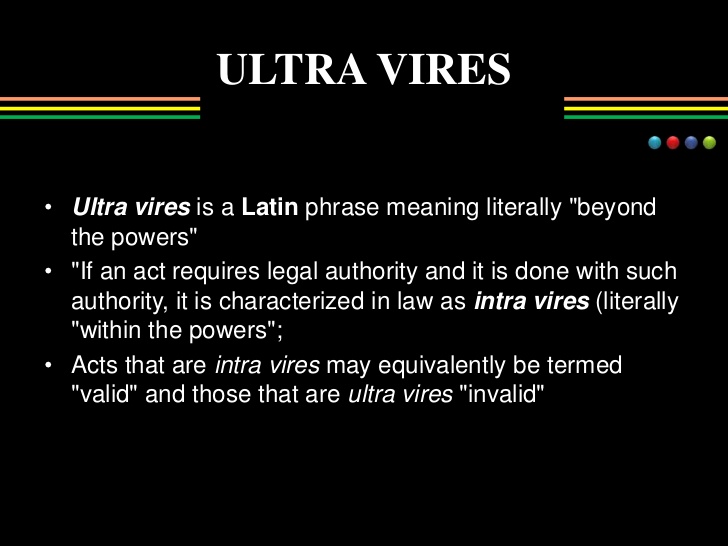 As I pondered the meaning and application of ultra vires and intra vires, I wondered how I could apply it to my Theology.  In essence I asked myself the question, do I or can I act ultra vires my Lord?  If so, do I or do I not?

I might need to really let this soak in order to apply it broadly, but an example I stumbled across immediately gave me pause.  Every time I say something like “God says…” or maybe “That isn’t what the Lord intended…” I could be walking on very thin ice.  There are two ways that I’m aware of to know definitively what God has to say.  He can speak directly to me.  …And I’m not talking about a prayer session where you think you were moved.  I’m also not talking about when you pray for guidance, roll up at a book store, and a book you ran across solved your supposed problem, and you mention later, “God lead me to that book.”  Nope, I’m talking about the Almighty sending an Angel or showing up in all His glory to communicate with you.  Nothing else satisfies.  The other way to know God’s word is through scripture.

It should be noted at this point that the places we retrieve our scripture matter supremely.  I wrote a blog last year about the subject of bible versions.  You need to read THAT ONE big time.

I worry, that while I believe I have the right idea about many things, I should be darned careful about what “God wants” or what He doesn’t.  If I’m making the statement that something should or shouldn’t be done, said, considered, etc., I could be ultra vires if I’m not absolutely certain.  I should be able to immediately or eventually cite the scripture with context as it pertains to my statement.  Can you do that for each thing you may have cited in the past?  That isn’t a tall order really, but I can tell you with certainty I fall short on this one.  I have no doubt I’ve been ultra vires more than just once or twice, and that scares me as much as it disappoints me.

Not so oddly, I keep finding an irrefutable universal truth among my blogs.  Biblical literacy almost always is the part or whole answer for these problems, at least indirectly and often directly.

2 Timothy 3:16-17 (KJV) – All scripture is given by inspiration of God, and is profitable for doctrine, for reproof, for correction, for instruction in righteousness:  That the man of God may be perfect, thoroughly furnished unto all good works.

Be salt and seek light friends, and in this case be intra vires!  Please.